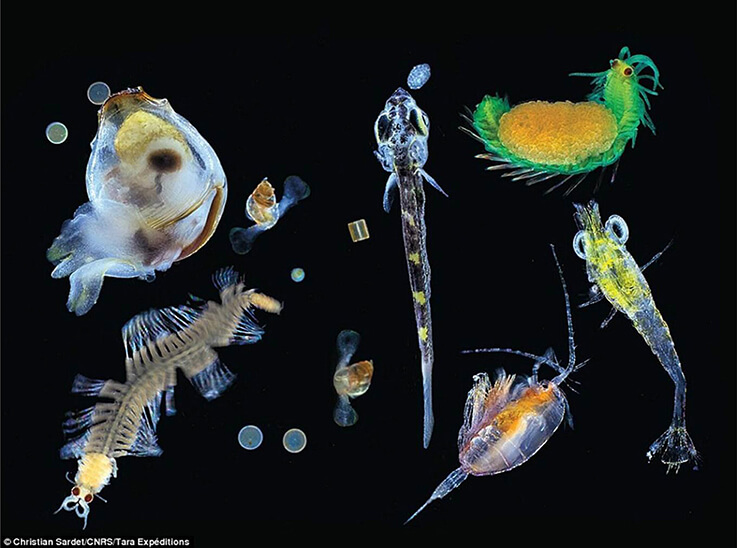 Plankton (from the Greek πλαγκτόν [plankton], ‘that which wanders’ or ‘that which wanders’) is the name given to the group of organisms, mainly microscopic, that float in salty or fresh waters, most abundant up to a depth of approximately 200 meters.

It is distinguished from nekton, the word for all active swimmers, and from neuston, those living at the interface or boundary with the air, i.e., at the surface.

Plankton (organisms that live in suspension in the water), benthos (from the bottom of aquatic ecosystems), and edaphon (from the community that inhabits the soil). 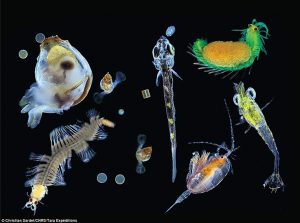 It is a word of Greek origin. It is spelled plankton and means “that which goes wandering”.

Plankton is defined as an extraordinary community of microscopic aquatic organisms that can remain suspended in water.

That is, they are unable to move by their own means. Floating is the only available option because they have no other way to move. Therefore, they make use of the undulations of the water produced by the tides.

The planktonic constituents are calculated in the trillions. This is precisely the main characteristic of plankton: none of these ancient, tiny creatures that move in columns of water or on the surface of the water, can move on their own. It has no capacity for locomotion.

This set of organisms of animal or plant origin is passively moved thanks to the ripples of salty and freshwaters. The first person to use the term plankton in his research was Victor Hensen, in 1887.

What types of plankton are there?

Strictly speaking, plankton is a large community composed of organisms that are subdivided into: 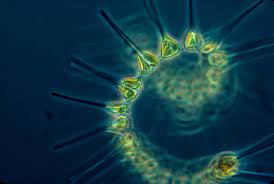 They are microorganisms of plant origin. They are autotrophic beings, which means that they are self-sufficient because they can synthesize their own food from non-organic sources.

In this way, they act like any other plant. They take advantage of environmental sources of energy and inorganic matter to subsist. It is the base of the food chain.

They are microorganisms of animal origin. Herbivorous, carnivorous and omnivorous organisms can be found among these microscopic beings.

Some manage to establish a symbiosis with algae and others become parasites of organisms to maintain themselves.

These are considered as first-level consumers in the trophic chain, since they feed and live on phytoplankton, taking advantage of the goodness of algae or phytoplankton.

They float like lost wanderers, within the first 200 meters of depth in the aquatic ecosystems of the planet. None of them is capable of moving by its own means. They drift, at the mercy of sea currents and/or aquatic currents.

Several authors have made a classification of plankton by size, although it is a division that can be considered “artificial”, since it was initially based on the mesh size with which the catches were made, and no definitive agreement has been reached.

One of the most commonly used classifications is as follows:

Horizontal or distance from the coast:

How is plankton formed?

In the case of plant plankton, which as we have already explained is called phytoplankton, we have that its development occurs in the coastal regions of the seas and oceans of the planet.

Where there are solar light and mineral salts, at a depth of about 30 meters. Thus, with these minimal conditions, they are able to create their own photosynthesis to feed themselves and stay afloat.

Some types of algae and even bacterial communities are considered plankton.

There is a classification according to the size of these primordial beings, ranging from 5 microns to 10 centimeters. They are divided according to size into Ultraplankton, Nanoplankton, Microplankton, Mesoplankton, and Megaloplankton.

What is its role in the food chain? 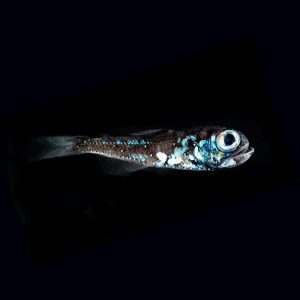 Their role in the food chain is fundamental because these almost invisible beings are the base of it.

They serve as food for many marine animals, from the smallest fish to mammals as large as whales or dolphins.

Plankton also plays a key role in the biogeochemical cycles. Such is the case of their participation in sedimentation and fossilization processes.

Which is derived from the use of fossil fuels as a source of energy, which has its origin in the dead plankton trapped between deep rocks in the different layers of the Earth.

There should be no doubt then: plankton is pure energy, alive or dead.

Why is plankton important? 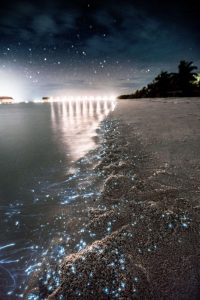 Plankton is food for an unimaginable marine fauna, as there are still many undiscovered species hidden in unexplored depths.

But they also play another vital role in planetary life: they are producers of oxygen. And they are even involved in regulating the planetary climate.

In a number of rigorous studies, the scientific community has reliably demonstrated that plankton produces about 50% or more of the oxygen of the entire planet.

So it is absolutely indispensable for the fulfillment of the life cycle because it provides the O2 needed by all living things. From an economic point of view, it is of strategic importance for human beings.

Because they are the basis for the sustenance of fishing communities settled on the coasts of the Earth’s seas, fish, many of the commercial species, feed on the plankton of both plant and animal.

What causes the decline of plankton in the sea

When phytoplankton dies, they decompose in the water and produce so-called “dead zones”.

Because all the oxygen previously available was consumed and there are then areas without this vital element for the life of fish, which also perish, also reducing the marine biodiversity.

Recent studies published in the journal Nature, have established that during the past 20th-century plant plankton seriously declined in the salty waters of the planet.

Due to climate change which literally warms the seas and oceans as temperatures rise. At the planet’s poles and in tropical regions, plankton has declined by an average of 1% per year, according to a team of scientists at Dalhousie University in Canada.

In this study, nearly half a million observations were made, allowing the accumulation of precise, complete scientific data on this phenomenon associated with climate change.

This has also served to further investigate the historical evolution of phytoplankton, with data going back as far as 1899.

Plankton is the biomass of the planet because of their great accumulated energy in living matter, available in saltwater and freshwater ecosystems.

They are essential for zooplankton and large mammals, fish of countless species, and the entire marine community in general to obtain food, energy for life. That is why it is also called the fuel for the marine ecosystem.

How does pollution affect plankton?

Climate change, the global warming of the planet have generated a process of gradual increase in the temperature of the seas and oceans highly dangerous.

This has brought about the disappearance of millions of microscopic beings that are key to maintaining life on earth as we know it.

With the increase in temperature in the world’s marine waters, the consequence is a significant depletion of phytoplankton. This is most noticeable in tropical regions, those closest to the equator.

Out-of-control greenhouse gases in inadequate concentrations in the atmosphere have been accumulating since the industrial age began.

Exacerbating from the indiscriminate exploitation of fuels of fossil origin such as oil, coal, and gas available in the depths of the Earth, which ironically come from a lot of fossilized plankton.

Boris Worm, one of the brilliant authors of the study published in Nature about this phenomenon as dangerous as it is sad, explained the following: “Vegetable plankton plays a crucial role in the ecosystem of the planet.

It produces 50% of the oxygen we breathe, reduces carbon dioxide, and is important to the fishing industry. An ocean with less phytoplankton will function differently. 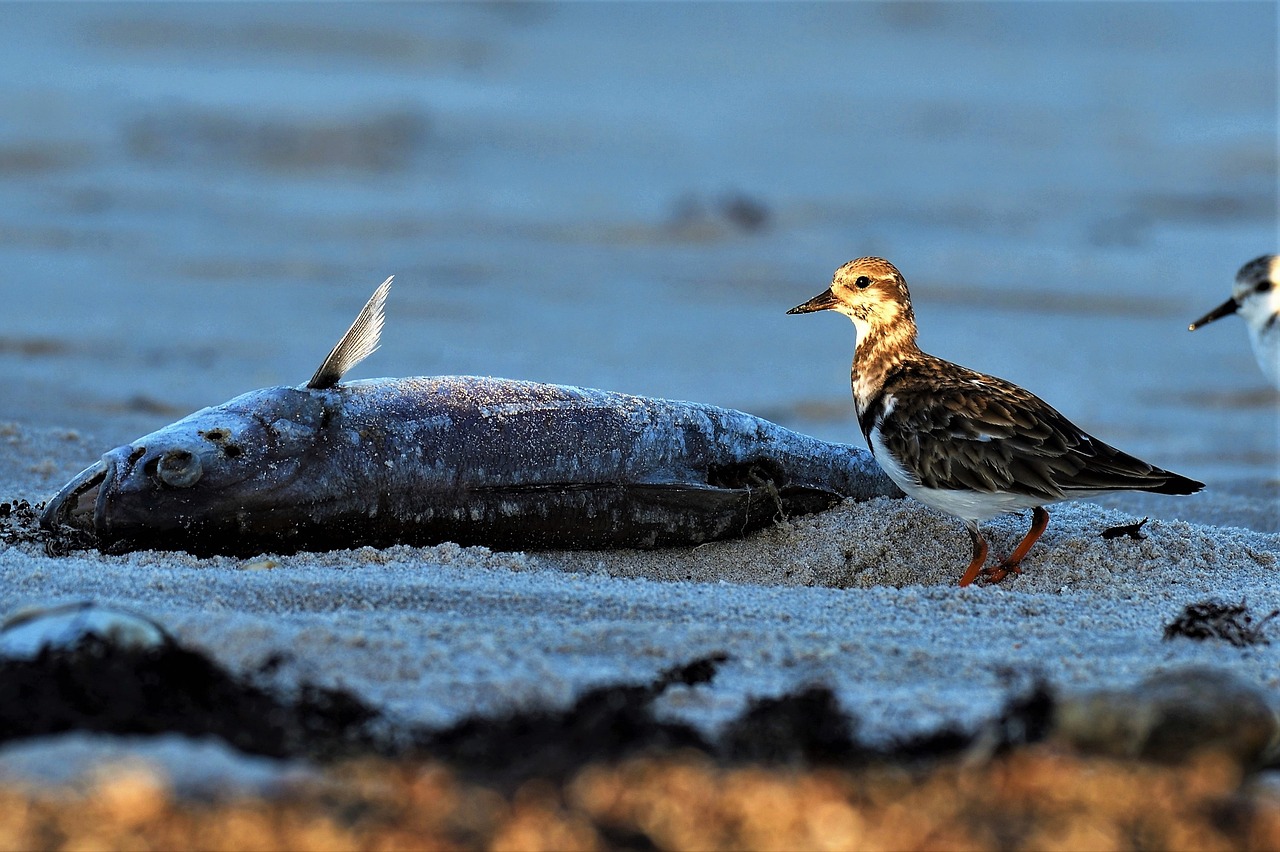 Commonly known as “red tides” are the proliferations of dinoflagellates (phytoplankton) that grow exponentially due to favorable conditions for their development (temperatures, quality, and quantity of light, nutrients, and passivity of the water column).

Their reproduction does not stop until conditions are unfavorable.

Many times these algal blooms go unnoticed, but it is possible that the bloom is of some type of toxic phytoplankton, such as Alexandrium catenella, which causes death in vertebrates such as humans.

Not all blooms turn the water the red color that gives the phenomenon its name; paradoxically, the most harmful blooms are colorless, so experts often refer to them as “harmful algal blooms” (HABs).