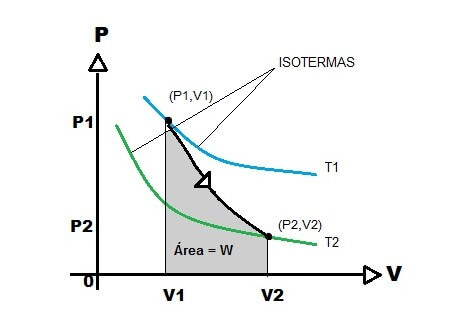 What is an adiabatic system? 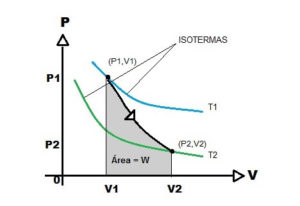 Thermodynamics explains, in simple terms, that the adiabatic system functions as a fluid incapable of exchanging heat with its surroundings.

In this sense, it is the opposite of an isothermal process, where the heat exchange is total, thus achieving a constant temperature.

Although adiabatic is also reversible. When this occurs, the isentropic process is present. In the adiabatic process, moreover, volumes are present that do not allow such heat transfer with the surroundings.

For example, an insulated wall resembles an adiabatic boundary and also occurs with air conditioning processes, where the steam input from the water will always be adiabatic because vapor transfer does not occur even if the air temperature and relative humidity are varied.

A clearer example of what an adiabatic system could be is what we have at home, every time we use the thermos to store coffee. And the ice chest. In the thermos it will happen that every time heat is supplied by filling it with the hot liquid, the interiors of the system are not abandoned.

This means, that even if it does not occur, the heat tries to be maintained as much as possible, although if it were a perfect adiabatic system it would never cool the contents of the thermos. As the heat loss is gradual inside the thermos, then it is considered an adiabatic system where heat is not exchanged or lost, because it is assumed that the temperature inside the container is higher than in the environment.

Another example has to do with the operation of a refrigerator. When it is operating it does not perform this process, but when it is stopped, in disuse, it is, because the motor transfers the heat from the inside to the outside. A requirement of the adiabatic process is that its temperature remains constant.

Thus, adiabatic heating and cooling processes occur due to temperature changes in a gas, which allows for variations of temperature volumes that are quantified based on the ideal gas law. With this process, the principle that supports the first law of thermodynamics is conceptualized.

What is adiabatic cooling?

Adiabatic or evaporative cooling is very often used in industrial processes, but also in air conditioning in buildings.

This is achieved through a process of direct atomization of microdroplets of water or steam. It also works with support on humid panels that are crossed by the air current, with the aim of achieving a reduction of the dry temperature and an increase of the relative and absolute humidity.

It is applied in those cases where no energy exchanges with the environment occur, as happens, for example, in the expansion of a gas inside a cylinder, and in tests aimed at determining the power heat that fuel has, where all the energy of the fuel will be transferred to the compound inside the test equipment.

In the air conditioning area, direct adiabatic cooling processes are applied to the supply air and applied in dual-flow systems with heat recovery, where the exhaust air is pre-cooled by passing through a heat exchanger.

This is called the indirect adiabatic cooling process. In this adiabatic operation, the energy consumption is always very low indeed. And air cooling is obtained in the range of 2-10°C.

But there are also factors that depend on the hygrometric conditions of the air and the water temperature for it to work properly. And in the realm of meteorology, the adiabatic cooling process generates condensation of moisture and salinity, leading to oversaturation.

But since it is imperative to remove the excess, then the process becomes pseudo-adiabatic and the formed liquid water-salt that condenses is removed just out of shape thanks to instantaneous precipitation.

What is the difference between the isothermal and adiabatic processes? 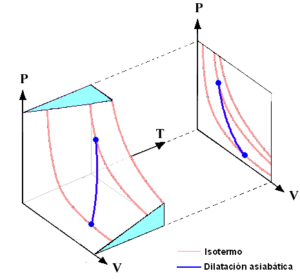 In adiabatic processes, no heat is ever gained or lost. As already mentioned, there is no transfer of heat to the environment, because there are elements that prevent it.

Adiabatic heating and cooling are processes that commonly occur due to a change in the pressure of a gas.

The isothermal process consists of a reversible temperature change in a thermodynamic system that remains constant. For example, the compression and expansion of an ideal gas in contact with a thermostat permanently is a clear case of an isothermal process, where the gas comes into contact with another system of fairly high heat capacity, at the same temperature as the gas.

The heat here is transferred slowly so that the gas can work efficiently. Sit happens that since the internal energy of an ideal gas depends only on the temperature and this always remains constant in isothermal expansion, then the heat taken from the focus is equal to the work done by the gas. Q=W

The isothermal process is the compression process whereby the temperature is kept constant but the volume and pressure vary.

What is an adiabatic reactor?

It is a chemical reactor, thermally insulated, where no heat is lost or absorbed from the outside.[/note]

How does the adiabatic process work? 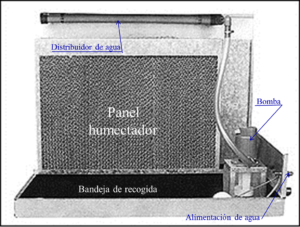 Roughly speaking, the operation is as follows:

The dry air when passing through the air conditioner usually passes through the humidification section, where a supply of water is achieved by steam lances or wet panels.

Direct evaporation of liquid water microdroplets will occur after the humidity level is increased above the saturation level of the air. Not before. And dry air circulation produces this effect.

There is, as mentioned above, fairly low energy consumption because there is the only activity in the fans used to transfer the air and the pumps used to recirculate the water. Nothing else consumes energy.

It does not happen the same in conventional air conditioning systems, because the cooling works with support in refrigerating machines that each have compressors that need to consume a lot of energy to operate at maximum power.